Somebody had a birthday... and a Quidditch party

And it wasn't me. Well, I have just had the birthday bit but not the Quidditch party. Not that I was thinking of my birthday at all when I wrote that title - mine was lovely and gentle but most non-blog worthy. Patch's, though now a few weeks ago, was slightly more blog worthy as it involved two cakes and a few makes. The first cake for Patch's birthday 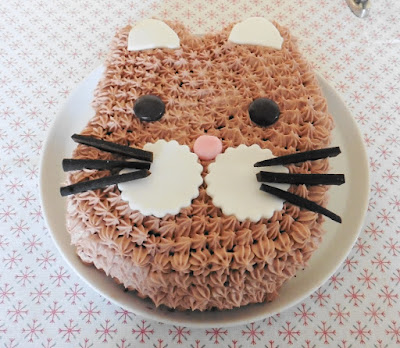 This one made our cat loving boy very happy. Followed a week or so later by a not so gentle looking cake for the party 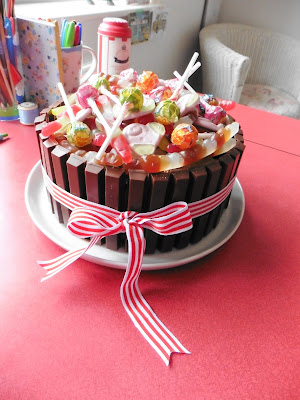 Which made a group of serious Quidditch players very happy. Both cakes were made with the same chocolate cake recipe - the hummingbird bakery's devil's food cake, with dairy-free butter and milk substitutes, which makes for a most yum choc cake but the very best bit is the creamy icing holding it altogether. In this house we obviously like to include all the family in being able to munch such celebratory cakes but it can sometimes result in a slightly hmmm, you can tell that's not made with butter treat. Particularly so for butter icing. But no longer, with a mix of dairy-free marg, almond milk and Trex. That stuff works wonders for a non-butter butter icing. (I know the supporting kit-kats are not suitable for a dairy-free diet but those concerned were fine having them resting on the icing) 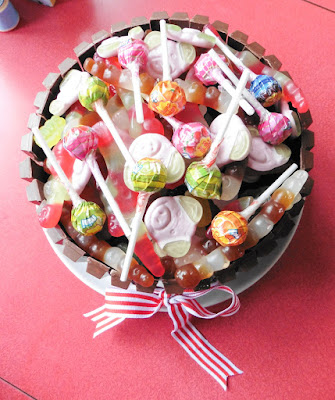 The crazy amount of sugar was just the thing for half time in the Quidditch match. When a Quidditch party was first mentioned, I thought we would maybe blow up a balloon Quaffle and a few bludgers, fashion a golden snitch out of something gold and gather together a few brooms. The most tricky thing was going to be how to attach the hoops for goalposts. But then Daddy got involved and there was talk of official Quidditch teams and a World Cup and proper rules.

They loved it! All came with brooms (Joshua's freshly made broom still had green leaves), though Zofia misplaced her broom and we had to have a rummage in the village hall broom cupboard. There  were various balls, bright pink laundry baskets for goalposts, a snitch made from a golden cat's toy ball - the ones with holes which was most handy to poke through a length of white netting for wings. Mr R happily took on Madam Hooch's role and amazingly all the children understood the rules and went home undamaged 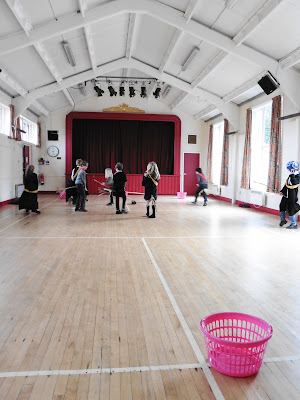 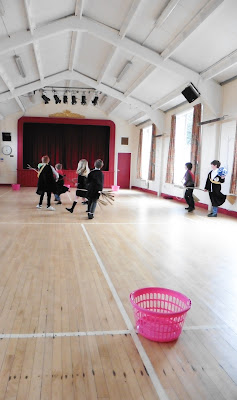 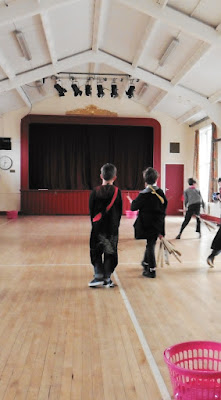 I did want to make something other than the team bands and decided that Patch really needed a Gryffindor scarf. I had thought that P would be wearing the Harry Potter costume made last year which included a generic wizard cloak made a few years before that. It was only when P was discussing his upcoming party with the lovely owners of Delphine's Diner where we were having an actual birthday milkshake, that P mentioned that the wizard's cloak simply was not the thing for a student attending Hogwarts.  Luckily we had just over a week until the party so time for me to make a suitable cloak. But then lovely, lovely Delphine owner presented Patch with an official Harry Potter cloak for him to borrow. I think she may have seen my face when I realised I had a cloak to make, and had dashed upstairs to ask her daughter if we could borrow theirs. How lovely! Leaving me to get on with knitting a scarf.

I looked on Ravelry and sort of mainly followed this one though rather vaguely followed. I loved knitting the double sided scarf but on straight needles - a little bit of knitting magic! The wool is Drops Nepal in deep red and goldenrod and I just knitted until a good length and then added the necessary tassels. A rather lovely Daddy of a rather lovely friend of  Patch's amazed and astounded us all by making these gorgeous wands for all of the children. Each of the wands was different and made       a magical party bag present. He will be forever known as Mr Ollivander. 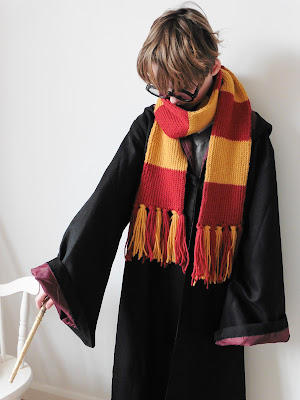