A stylish cowl according to Mademoiselle Sophie 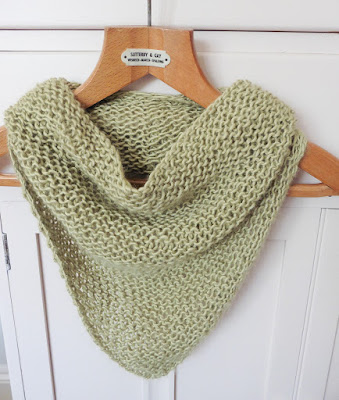 I used some oh so, so soft wool from the basket, so my cowl is a baby alpaca and mulberry silk cowl rather than an angora cowl. I bought this wool an age ago from Cafe Knit - pretty, full of dreamy yarns, and delicious coffee and cake. Yum. Anyway, purchased an age ago, possibly with a make in mind but I have no idea what that was and so it has been sitting in the basket. (For so long that this wool is no longer available). While this wool is oh so soft, the silk content means that it is very drapey and so it has been waiting for the right project.

And there it was, the Angora cowl. Mlle Sophie's version stands a lot taller around her neck, whereas this is floppy, but that must be that silk content. I used one strand of the wool - oh, I haven't mentioned what it is yet! Debbie Bliss Andes in the delightful pear colour.  The point of the cowl is knitted from the tip upwards and then knitted straight, with the two straight edges then joined at the back. As I knew this cowl would flop I knitted quite a few more rows after the increases in the hope that it would bunch up a bit more. And because I had two balls of this wool. Now it is finished and has been worn a lot (yes a lot - wooly cowls in April!) I do wish I had knitted even more rows and used the wool up. I now have a smaller ball of this wool sitting in the basket, which will no doubt sit there for many more years.

I have already knitted another scarf from this book, something slightly more springlike, and also have some other wooly makes to show before it gets hot and no-one wants to be thinking of such things. So, more wooly makes soon! 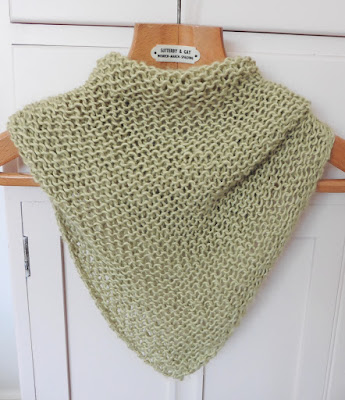 Posted by mrsrobinson at 01:32 No comments:

A penguin for Leo 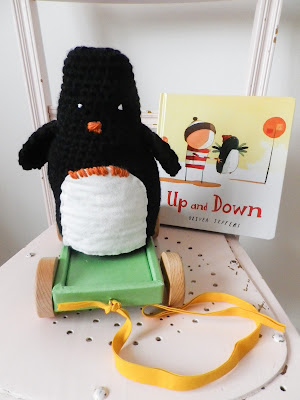 My friend's little one's first birthday was just the reason I needed to make this delight. Not sure now when, or where, I came across this pattern for the Up and Down penguin by Emma-Jayne Fakes but I was itching to make my own. Well, Leo's own.

This version has a slightly more elongated head than the original which is totally my fault - I should have paid more attention! He was made using some unknown black wool from the basket but I do think it was thicker than the DK used in the original pattern, and so he simply needed less rounds for his head. Oh well, by the time Leo has cuddled him and sat on him a few times, I'm sure no-one will notice.  The wheeled base is part of a toy I bought in the M&S sale a few years ago, for this very purpose.

Do hope you are having fun being one, Leo!
Posted by mrsrobinson at 00:27 4 comments:

The other baby cardigan

Now knitted so long ago it possibly fits baby no longer... This was the second cardy I knitted for a soon-to-be-Gran-again last summer 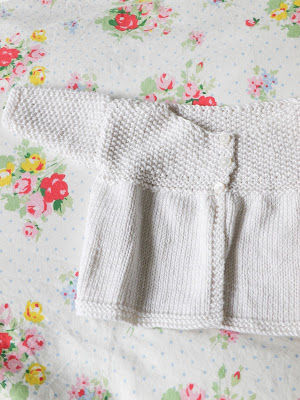 Soon-to-be-Gran chose the pattern from a pile of my knitting books, which I was most happy about because of the moss stitch. This is the matinee jacket from Claire Montgomerie's easy baby knits. It is worth doing a quick Ravelry check for errata as my copy of the book has a few mistakes for this pattern. The wool used is a wool and bamboo mix - cozy bamboo by Ella Rae in Lullaby - chosen because the bamboo seemed suitable for a babe living in Australia 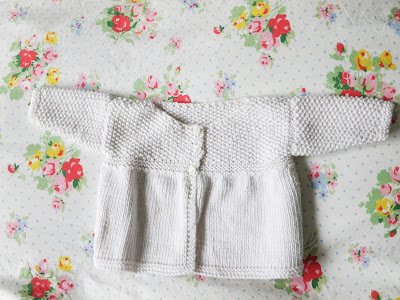 This is a very silky, drapey wool with quite a sheen. I had to size down to 3.75mm needles to get the correct tension. Oh, and like others before have said, this seems to be a fairly wide knit, certainly compared to the other cardy knitted at the same time.

How dreamy - a little pile of baby cardies! 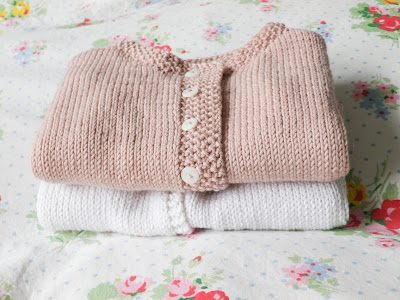 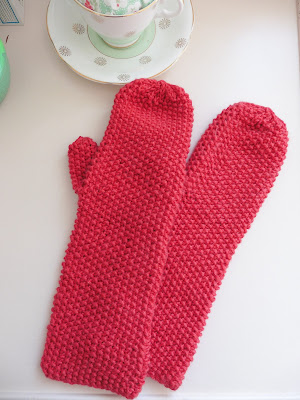 Mittens for me. And oh, how I love them. Mittens and moss stitch...

My mittens happened as happily the same day the purl bee released their free seed stitch mittens and handwarmers pattern and I fell in love and had to make some now, Mr R gave me some wool as a Valentine's Day present. I am a lucky duck. That was two years ago. I decided that this was to be the pattern I learnt the magic that is the  knitting in the round magic loop. And it took me an age to understand but now... now everything for the almost last two years is knitted using the magical magic loop. No more ladders up the sides of my knits thank you.  And so I oh so happily knitted a mitt. And then, just as when I knitted some socks, I felt the happiness of having finished my pair of mittens and was all eager to wear them. The only problem was, I had finished one mitt. And so this one mitt sat, alone in a bag until I needed some telly watching knitting this Christmas time and they were rescued. 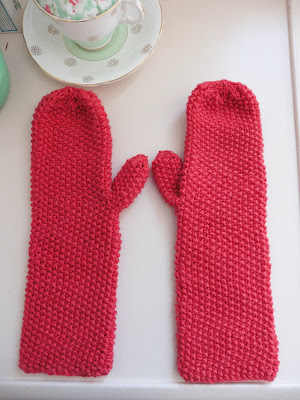 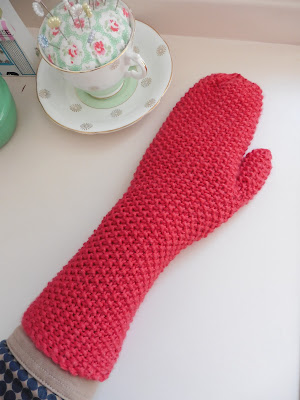 Posted by mrsrobinson at 06:46 No comments:

Did I really just knit a minecraft hat?

Not so long ago, I had little idea that this is how I will spend my time. But I had pleading from P that I make one for his friend for his birthday. And that pleading has continued once P realised I had wool leftover and is now planning one for his very own lovely head 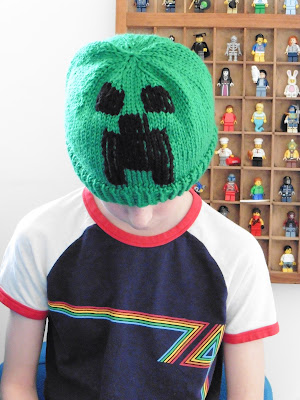 A few minutes on Ravelry found Alexandra Davidoff's Creeper beanie. I didn't happen to have any suitable colour wool in the basket, so ordered a ball of Cascade pacific in kelly green from Wool Warehouse. A true kelly green seemed the right colour, so this limited my wool choices, but really I have little idea what makes a good minecraft green. Cascade pacific is a rather floppy wool - I think the word may be drapey - with a slight sheen to it. The pattern is for a one size fits all, and I made a slight change from the pattern by knitting it on the same size needle, ribbing and all. Because I had the required 4.5mm and not a 5mm, and as it is made to fit adults and children I thought this would be OK. And it is OK, though the ribbing is fairly loose and it is quite large for a child's head. Also, peculiar gathered effect at the top. Next time (gosh, did I really say that?) I would use a simple hat pattern used before for a better fit and then add the duplicate stitch. The black wool was from the basket and whilst a similar weight it was much sturdier which may be why the green shows through the stitching.

So, whilst I may not see this as one of my favourite makes, Ben was most happy with his hat. And Patch just a little envious. Happy birthday, Ben!
Posted by mrsrobinson at 09:40 No comments:

Those Christmas pyjamas I mentioned...

Oh my, there has been poorliness for all in our home this past month. Hopefully we have now all shared so can get on with being healthy and cheery once more. And even though it may be one of the sunniest days of the year so far, I am going to show these pyjamas - which P is still wearing. He doesn't seem to mind snow globes in spring 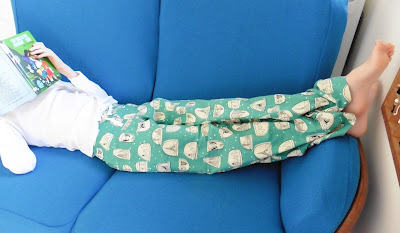 The pattern is the much used oliver +s sandbox pants at its most simple - actually, just without the pockets, but that is enough to make these a quick make. Made in the size eight I think (oh why don't I pay better attention, or make a note somewhere as to which size I'm making? I end up each time looking to see which is the largest size traced off and using that... there has to be a better method!) If these are a size eight then they are still rather long on my newly nine year old, and would be massive around the waist.  I have learnt to use Patch's waist measurement rather than that suggested in the pattern as they do seem to come up oh so large. 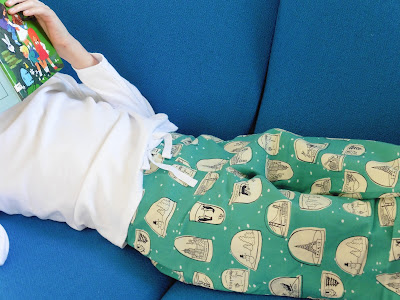 The fabric was the main reason for these pyjamas. Oh, and it was Christmas. It is cotton + steel's snow globes and it is oh so soft and a delight, purchased from poppies and polka dots. And they should still fit come next Christmas! 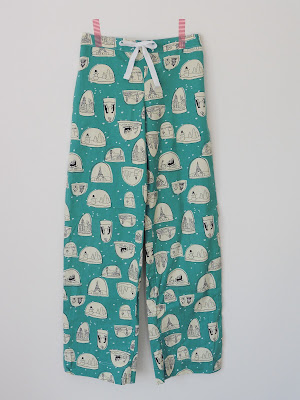